What is Screenshot Monitoring and is it Ethical?

Out there on the internet, there's a lot of buzz around this word. Especially after Covid - people now are discussing screenshot monitoring tools more often. The abrupt shift in attitudes and acceptance towards these tools is due to the fact that it's practically impossible to register employees' activities when they're working from home. To cater to this problem, employers generally look out for options to cast an umbrella and track each individual, regardless of the limitations of time and space.

Undoubtedly, the culture has brought several benefits to the table, but there's one side that hardly is paid due attention - Is it ethical?

Would you like anybody spying on you? Absolutely not! So, how good are these screenshot monitoring tools, and how do they work?

To record our take on these questions, we've penned down this article that'll fill all the gaps you may have about this subject.

What is a Screenshot Monitoring?

Fundamentally, such a tool is designed to capture a screenshot of any computer system. The basic principle that these tools work on is to keep the employers or the concerned administration updated on the activities and workflow in their organization.

As said earlier, WFH has fortunately or unfortunately gained much traction. More and more people are opting for this route to liberate themselves from the operational limitations they previously were bound to work in.

Screenshot monitoring tools are installed on the PCs (employees), and the systems are linked with the administrator's device. Now, the employees don't necessarily have to be at a specific place, and it grants them the freedom to work from anywhere on the planet, as long as it's aligned with the company's respective policies. The same goes for Employers who sort of outsource their duties to a tool that's not only more efficient but also cost-friendly.

Now, we're clear on one thing: the difference it creates for everyone out there. The second part is to jump into its functionality: How does it work?

How do these Screenshot Monitoring tools work?

Employers have control over the employee's PCs, and it's their choice to capture a screenshot at whatever interval they desire. Generally, manual screenshots are taken to quantify the progress. But, if the employer is busy around or not in a position to register the activities, then there's an option of automatic screenshots that comes built-in with the tool. The administration may set a specified screenshot interval or use the random screenshot option. This entirely comes down to the priorities of the company.

The next burning question we intend to respond to in this article is whether this way is ethical.

There are a lot of misconceptions about it. Many claim it to be illegal and unethical, which definitely is not the case, as far as some conditions are met.

In multiple organizations across the globe, when a person is hired - there's a consent form shared with the prospective employee. The purpose of this form is nothing but to ask for permission to record their activities at work. And this does encapsulate the entire working hours, regardless of the location. If the employee beforehand is conveyed this policy of the company or he agrees himself to be tracked. There's nothing wrong with it, and neither does it sound unethical in any way. The situation worsens when the companies breach someone's privacy without any consent form. This not only then is unethical but goes beyond that and is even illegal. So, the employers in this scenario may even end up behind bars. 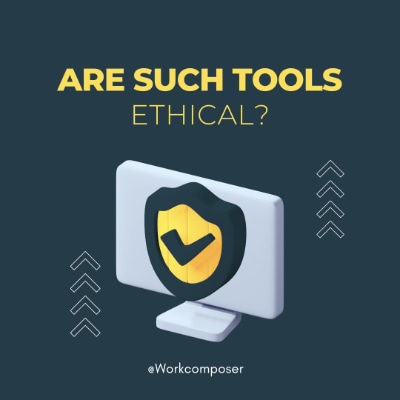 That's the reason why this policy must be dealt with extreme care.

Another unethical way of tracking employees is recording them during working hours. We don't endorse that, and neither do we encourage any of our readers to indulge in such activity. There's a fine line between monitoring and spying; once it's breached, the trust breaks, often resulting in uninspired employees. Thus, the overall culture of the company suffers.

As a leader, your job must be to ensure that your employees at any time are motivated, inspired, and all up to take up a task. Your job is to induce an attitude where they must not shy away from taking risks and that only comes when they're trusted and allowed to take on independent assignments.

If you've followed the article all the way to this point, you must be aware that Screenshot monitoring for real is in, and if used smartly, it's one of the best tools to track employees and take the productivity game to another level contrarily, how the ill use of these tools make them unethical. It's not the tool, but the use of it decides if it's ethical or not.

Have you already tried any such tool? If not, we've a widely accepted monitoring tool called the WorkComposer. You'll have an opportunity to leverage much more, along with the screenshot monitoring feature of it.

Now, take the control into your hands and track your employees from your bedroom!