In this article, we will guide you through the process of installing and running the WorkComposer app on the remote server having administrative privileges with no interaction with the Windows user.

The first step is to enable the Stealth Mode in the Organization Settings so that the WorkComposer always starts in the background without opening the window when started. 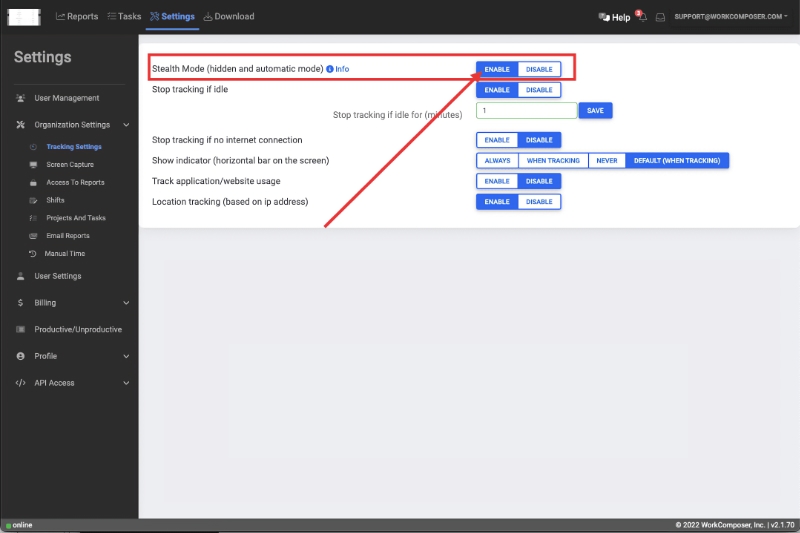 2. Disable the indicator (the horizontal bar on the screen), optional

Once Stealth Mode is enabled, you may want also to hide the indicator (the horizontal bar on the screen) to minimize the user interaction with the app even further

4. Running the installer on the computer from the command line

5. Running the WorkComposer app for the first time with the user credentials

After the installation, you need to run the WorkComposer application the first time from the command line and provide the user credentials to sign in automatically. After that, when users restart the computer, the WorkComposer will launch in the background automatically. You need to run the WorkComposer app with the username of the user on the computer in order to register with the autostart and set up the local database for that user specifically. If there are multiple users on the computer, please run the app for each user separately using their own credentials. The WorkComposer executable is located at "C:\Program Files\WorkComposer\WorkComposer.exe" and you have to run it using the "runas" command to launch the app under the user account.
Run the following command in CMD. Replace the "windows_user_username" with the username of the Windows user. Replace "workcomposer_username" and "workcomposer_password" with the WorkComposer user credentials you have created in the User Management section

All set. Now, every time the user starts the computer, the WorkComposer will be running in the background, and you should start seeing their tracking data in the reports. 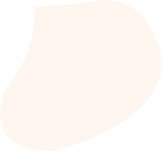 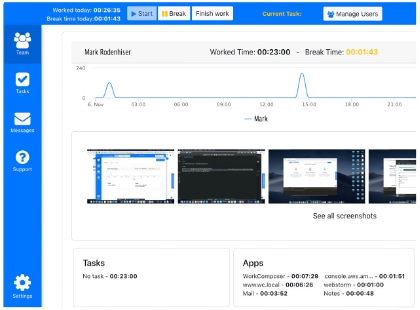 We promise to provide
bullet-proof security to all
our stakeholders.

Let's get you
Started

Have you been oblivious to all this? Don't worry, the
user interface at WorkComposer is purposefully
designed to be obvious. All you need is a
dedication to upgrade and enhance the overall
team competence.